Evernote is a great tool, both to capture stuff and to save reference material, two very important issues in any GTD system.

Once you have authorized FacileThings to access to your Evernote data, the settings option will be shown: 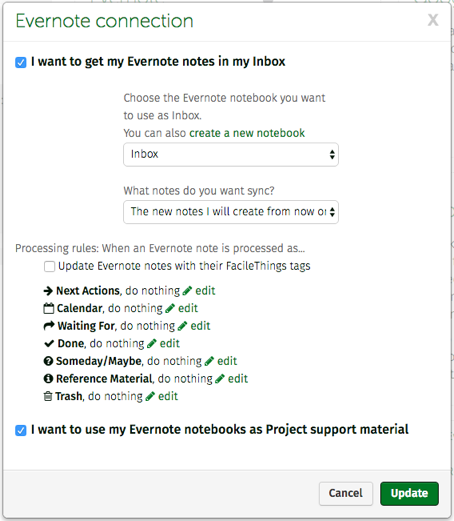 You can enable or disable any of the two purposes of this integration:

If you want, you can organize your notes in Evernote according to your FacileThings organization. For this you have a set of processing rules that you can customize as you like: 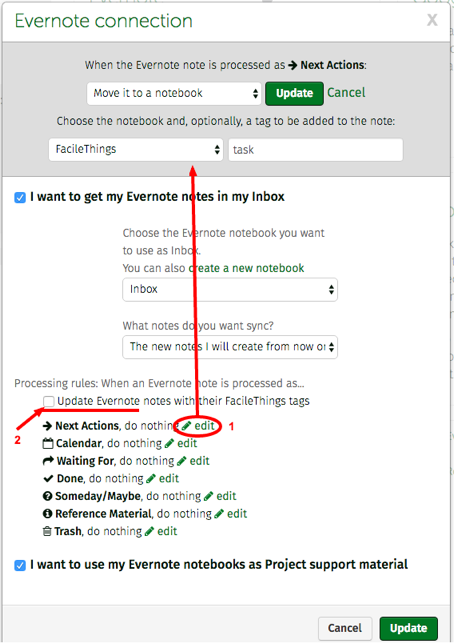 For each of the lists, Next Actions, Calendar, Waiting For, Done, Someday/Maybe, Reference Material and Trash, you can set three possible actions by clicking on “edit” (1):

If you activate the “Update Evernote notes with their FacileThings tags” parameter (2), the tags you add to the FacileThings item will also be added to the original note in Evernote.

The notes are automatically synced. When you create or update a note in Evernote (in the notebook you use as inbox or any other notebook you have associated with a project), Evernote sends FacileThings a message so the note can be updated. It may take a few seconds, but synchronization is almost immediate. If you made the change with an Evernote local app (mobile, tablet or desktop), the signal will reach FacileThings once the note has been synchronized with the Evernote server.

When it comes to a new note, a new item is created in FacileThings, with the title and tags of the note, and its content copied in the “Notes” section.

When it comes to modifying a note that already exists in FacileThings, the content of the note is copied back, but the title will be updated only if the item is still in the Inbox (we understand that the description you could give after processing the element is more significant within the GTD environment than the original title).

The task editor allows you to view the Evernote notes as you see them in Evernote: 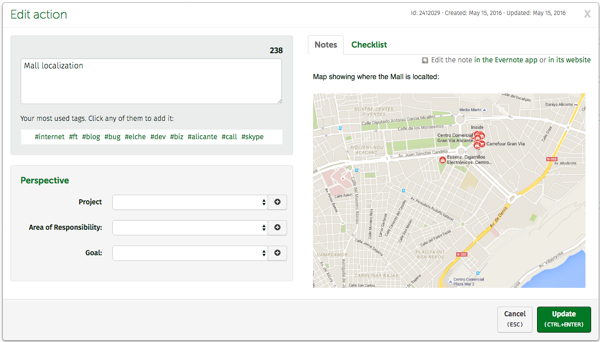 The content of the Evernote note is displayed in HTML format and all the resources associated are included: images, PDF and audio files. As a matter of performance and space we do not “copy” all those resources into FacileThings, so you must be logged in Evernote to see them (if you can’t see them, you just need open a new browser tab and log in Evernote.)

If you need to edit the original note, click one of the links that appears above the note.

Thanks to this viewer, you can use the Evernote mobile app to capture images and voice notes in FacileThings when you are out there. Capture them in the notebook you use as a bridge to FacileThings, and they will appear in your Inbox.

When you associate an Evernote notebook to a project, all its notes are imported, so they are always at hand in the Reference Material list of the project.

Like the rest of notes, when they are modified in Evernote, the content is updated in FacileThings.

This means that the number of accesses you make to your Evernote data from FacileThings (during sync processes) has an hourly limit. If that limit is reached, Evernote blocks your user for a period of time and no data synchronization will take place until Evernote removes that lock again.

Evernote does not indicate what the limit is, but it encourages developers to follow some guidelines in order to offer the best possible experience to the end user:

Also, all the sync processes that will take place when your user is locked will be rescheduled to be executed again when the lock is released. Thus, although with delay, all changes should be synchronized at the end.