In GTD, the word project has a slightly different meaning than the one you are probably used to. Here, a project is any result that requires more than one action.

Whenever you must do something that requires several actions, it is advisable to create a project. The project is just a reminder that you still have things to do in order to achieve that result.

The Projects section allows you to create and edit your projects as well as to add and organize the needed actions to accomplish them.

To create a new project, click the Add Project (alt-p) button at the bottom of the project list on the left: 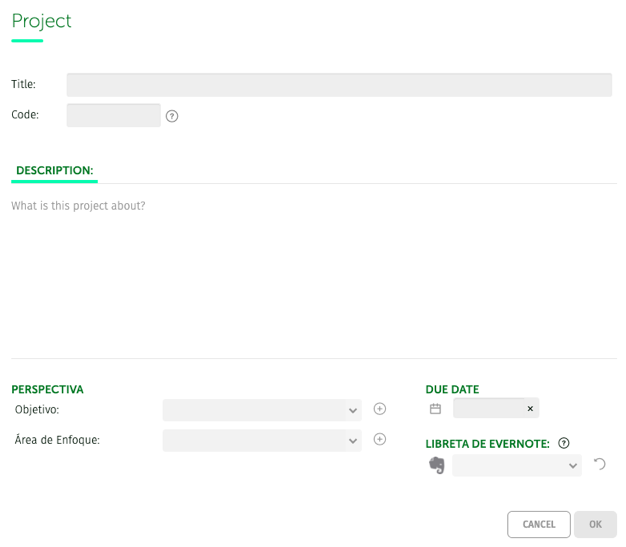 When you create a new project, you must assign it a title that correctly expresses the result you hope to obtain.

The project code is optional. This is a short word that will allow you to refer to the project if you want to use the :project inline command to add actions.

Optionally, you can give it a more detailed description and assign a due date, an Area of ​​Focus and a Goal. The actions of a project will inherit the Area of Focus and the Goal of the project, although the AF of any action may be modified later.

If you use Evernote as a personal repository of information, you can associate an Evernote notebook to each FacileThings project. This way you will be able to view all notes of that notebook on the project’s Reference Material list.

Define a sequence of actions

Most of your projects will be a sequence of actions to perform one after another until you achieve the final result. In these cases, select the Sequential type of project (1) and add the necessary steps to start the project using the Add action button (2, alt-a). 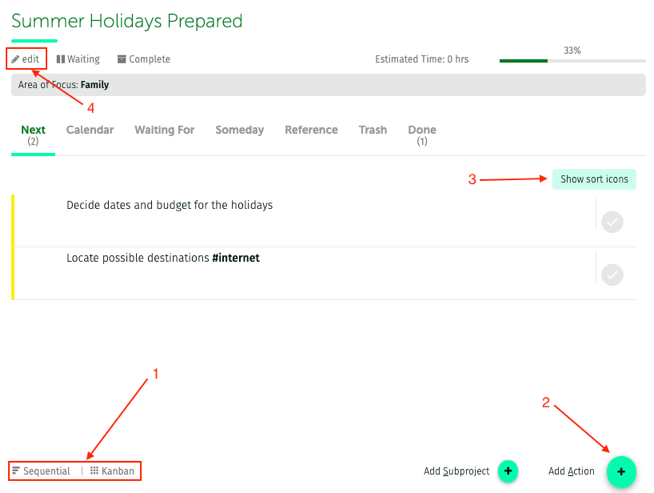 You can set the order of the actions in a project by dragging and dropping them in the position you want. As on tablets and mobile devices you cannot “drag and drop”, you have the option to Show sort icons (3), which will allow you to easily move any action up and down, and to the beginning and to the end of the project:

You can edit the project with the option you have in the project header (4). Within the project editor you also have the option to delete it (“trash” icon). When you delete a project, all its Next Actions and the Support material will be moved to the Trash.

Important! In the general list of Next Actions, only the first action of every sequential project appears, so future actions don’t distract you from your current work. When you set an action as done, the next action will automatically appear… and so on until you complete the project.

Sequential projects, that is, those which are not Kanban, can have subprojects. Probably some of your projects will be made up of groups of tasks that, though related, could be managed as a separate project. Subprojects will allow you to properly organize these types of components. Use the Add Subproject button (alt-s) to create a new subproject. 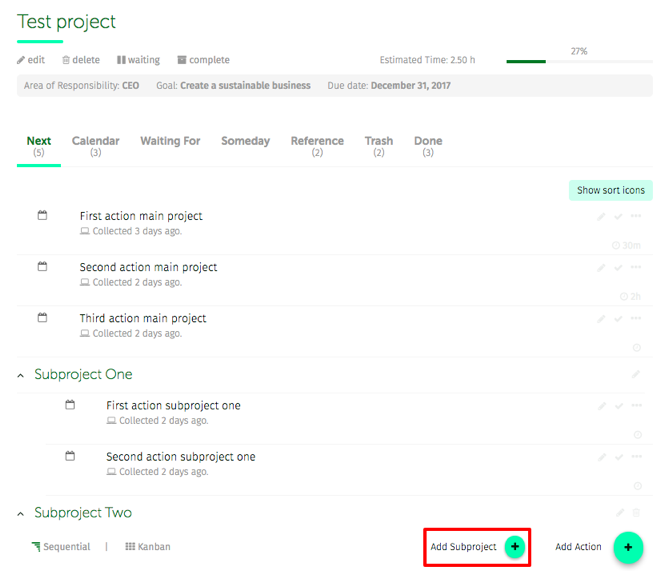 To create a subproject, you just need to give it a name, since the subproject inherits the rest of the main-project characteristics.

When you add a subproject to a project it is as if you had another list of Next Actions working at the same time. The first action from both the main project and the subproject will be shown in the general Next Actions list, therefore you can work on the different parts of the project simultaneously.

The Add Action button allows you to add a new action to the main project or to any of its subprojects. You will see a drop-down with the list of subprojects: 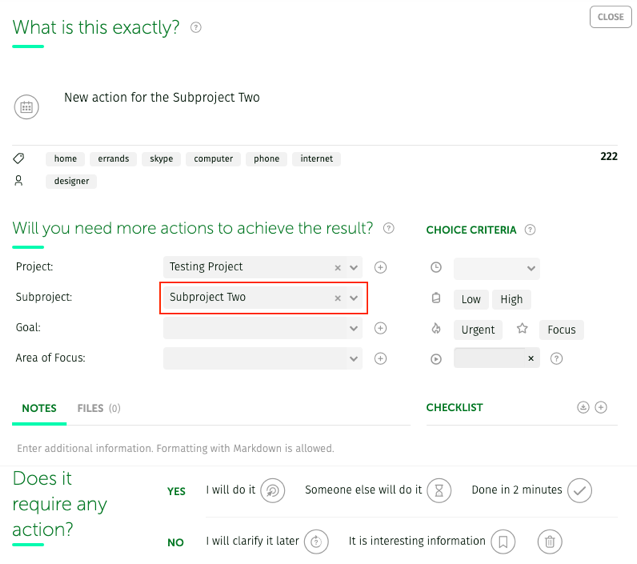 You can drag and drop actions from one subproject to another. When using a tablet, you won’t be able to move graphically one action to another subproject. In this case, you will need to edit the action and change the subproject field in the Perspective section.

To delete a subproject there should be no actions related to the subproject in any of the lists (not even in the Trash).

Personal Kanban is a visual tool for project management, very simple to use, and flexible enough to have several actions running simultaneously. 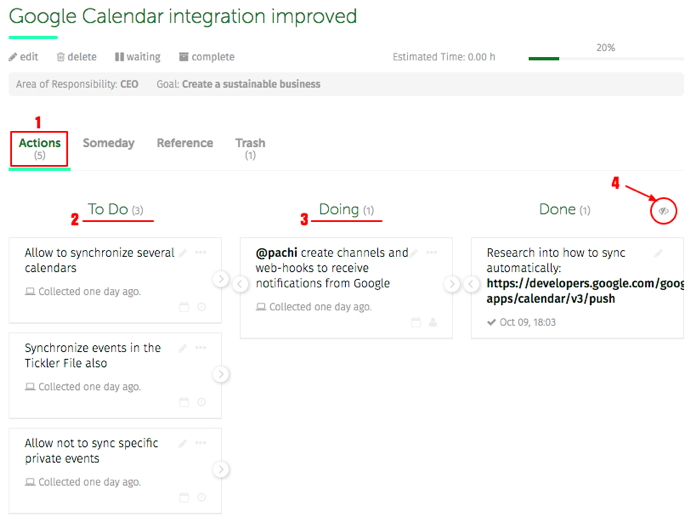 You have three columns where you can place your actions, named To Do, Doing and Done. When you add a new action to the project, it is placed by default in the To Do column.

You decide what actions can be done at all times, moving them onto the Doing column. You can drag and drop the cards containing actions, both to move them to other column and to change the order within a column.

The Actions tab (1) contains the active actions of the project, that is, those in the Next Actions, Calendar and Waiting For lists, in addition to the already Done actions. These actions still are in their GTD lists, although they are displayed differently here.

In long projects, when the Done column is growing non-stop, it ends up been unuseful. Now you have the option to work with two to three columns, to taste. You can set each project to have the Done list be shown within the Kanban or outside the Kanban, as another list: 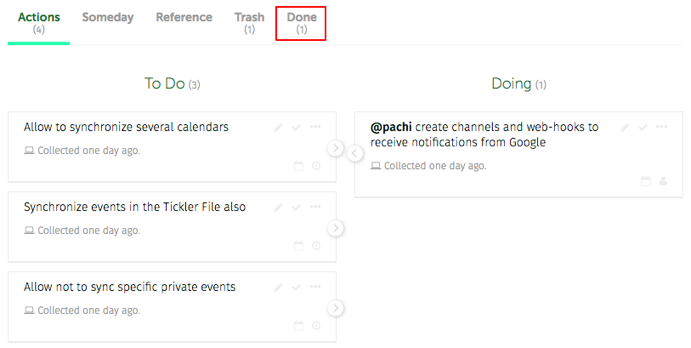 Note: When you change the way you manage a project, you lose the previous setup. When changing from Sequential to Kanban management, all the items in Next Actions, Calendar and Waiting For, are placed in the To Do column of the kanban. When changing from Kanban to Sequential management, each task is placed in its GTD list and, in the Next Actions list, tasks that were in the Doing column are placed before the ones that were in the To Do column, with no particular order.

It is a common scenario to have a list with a lot of active projects, but only need to pay attention to some of them each week. Use the focus (1) option to indicate which projects require your attention now. These projects will be marked with a full-star icon and shown at the top of the list, and their actions will also appear at the top of your Next Actions list.

Use the waiting (2) option when, temporarily, you cannot continue doing a project for whatever reason. The actions of a waiting project do not appear in the general lists, so you do not get distracted from your current activity. Use the complete (3) option to save the projects you have finished.

If you have a lot of projects in different stages, you’ll probably struggle when you need to find one particular project between all your lists and it will probably take you too much time. The searching tool that you’ll find in the lower part of the project list will allow you to find any project in a matter of seconds. You just need to type in a few letters and all the projects that contain them will show up. 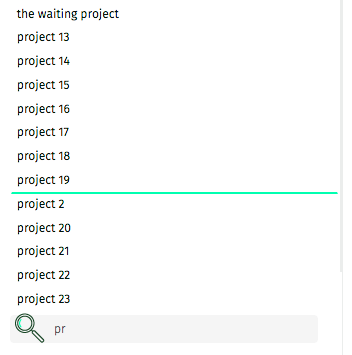 You can choose one project from the list using either the mouse, or the up, down and enter keys. Once you’ve selected a project, the Project List will open up automatically in the place the project is.

Likewise, when you create a new project, this will be added to the In progress list and it will be automatically selected.